In the following diagram the arrows show the direction of the dependencies. Any outer layer can directly call ANY inner layer. So the yellow layer (Adapters layer) can rely on all of the other layers. The application layer can only have dependency on the domain layer. And the domain layer should NOT have any references to the other layers. Any communication with the outside word happens in the Adapters layer.

This layer makes it possible for the application to communicate with the outside word. In order to interact with external components like databases, web, files system, etc. the application needs a layer which can convert its internal objects to something which is understandable by the external components and vice versa. For example a Data Access is needed to let the application talk to a database; or to be able to expose the application’s functionality through the Web, we need to create a Web Service which makes use of the .Net Framework web technologies. These components are called Adapters and they should reside in the Adapters layer. The inner layers or other adapters cannot have dependencies on this layer.

As the above diagram shows, there are two groups of external components: driving actors and driven actors (external resources). A Driving actor is an actor that drives the application (take it out of quiescent state to perform one of its advertised functions). End users, automated tests, or remote clients are a few examples of driving actors. Whereas a driven actor is one that the application drives, either to get answers from or to merely notify. Database, files system or remote web services are some examples of driven actors (a.k.a external resources). The distinction between “driving” and “driven” lies in who triggers or is in charge of the conversation. These two groups of the external components require two groups of adapters: Driving adapters and Driven adapters.

The driving adapters are where the composition root of the entire application should go. Any service registration happens in this layer.

This layer has the concrete implementation of the dependencies of the other layers. Infrastructure is any code that is a commodity and does not give your application a competitive advantage. This code is most likely to change frequently as the software goes through years of maintenance. That’s why no other layer should have any dependency on this. Any dependency to this layer must be through abstractions. For example if the software needs a repository, it should use an abstract repository (i.e. an interface) and the implementation of the repository goes to this layer. We rely heavily on the Dependency Inversion principle. The application core needs an implementation of core interfaces, and since those implementing classes reside at the edges of the application, we need some mechanism for injecting that code at runtime.

Note: The adapters in the infrastructure layer should be substituted for test doubles when testing the application. 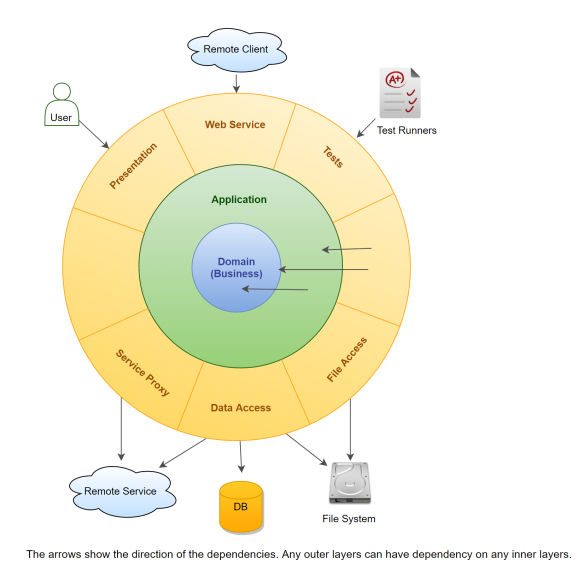 This layer contains the application services which are single responsibility classes that do the orchestration of the application and deal with application logic. These services are different from the web services that we have in the Web Service Layer. Please be advised that this layer is not meant to have any domain (a.k.a business) logic. Domain logic should go to the Domain Layer.

This layer will have all of the domain models: Entities, values objects, domain events, and the domain exceptions. The abstraction of the repositories also go to this layer. The business rules should be applied in this layer.

It is a clean architecture that means it can produce a system which is:

The concentric circles represent different areas of software. In general, the further in you go, the higher level the software becomes. The outer circles are mechanisms. The inner circles are policies.

The overriding rule that makes this architecture work is The Dependency Rule. This rule says that source code dependencies can only point inwards. Nothing in an inner circle can know anything at all about something in an outer circle. In particular, the name of something declared in an outer circle must not be mentioned by the code in the an inner circle. That includes, functions, classes. variables, or any other named software entity.

The following tenets are those of the onion architecture. Our architecture should adhere to all of them as it is a simplified version of onion: